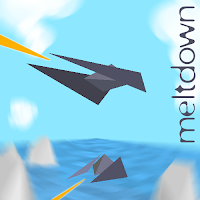 In the wake of ‘Peak Oil’ in 2143, factions struggle to claim their share of the world's trickling reserve. But deep beneath the melting ice of Antarctica a new oil deposit has been discovered; the likes of which have never been seen. As private prospectors flock to the site like vultures to a corpse, you are the only thing standing between them and the fate of an entire world. Should you claim the oil and receive riches beyond your wildest dreams, or make sure it remains buried and maybe save a dying planet?
Meltdown is my entry in this years Java 4k game competition. This year I teamed up with the game designer Daniel Frostberg who created the actual concept while I focused on the code. The game is a 3d dogfight game with a little twist, you have to fight below the surface as well as above it. Or as the strategy guide put it:

The Antarctic is an inhospitable place – especially with prospectors around, determined to eliminate all opposing competition. Luckily, your Black Gannet subcraft comes equipped with a fully automatic JLF3950 Chain Gun, an M1-R14M self-repairing hull and, of course, the ability to move through water as swiftly as through air.

However, to fit such advanced technology into such a small craft, its manufacturer was forced to compromise in two key areas; engine cooling and oxygen supply. Effectively, this means that operating above the surface builds up heat which must be cooled down by entering the water. Reversely, operating below the surface uses up oxygen which in turn must be replenished by reemerging from the depths.

This cycle can be used to your advantage, though, as enemies are bound to the same conditions and easily lose track of you when you switch elements. So check your gauges regularly and move between water and air to maximize your chance of survival.

We're very happy with the result even though the game play might be a bit complicated for a 4k game. People in general tend to not read the instructions before playing a game, and when you don't have enough space for tutorials it can be a bit confusing.

The game can be found at java4k.com or by going to:
http://java4k.com/index.php?action=games&method=view&gid=473

Hurry up and play all the awesome games and cast your vote before the 15th of March!
4k java

- June 11, 2009
Today i needed a jQuery plugin that could iterate over all cells in a column of a table. Since our tables can be very large i didn't want to use the jQuery column cell selector plugin since it creates a lookup table. We won't use rowspan in the tables anyway so i made my own column iterator. A demo can be found at:     http://slackers.se/resources/demo/columniterator/demo.html The plugin can be downloaded at:     jquery.columniterator.js     jquery.columniterator.min.js
Read more